A week of batch cooking 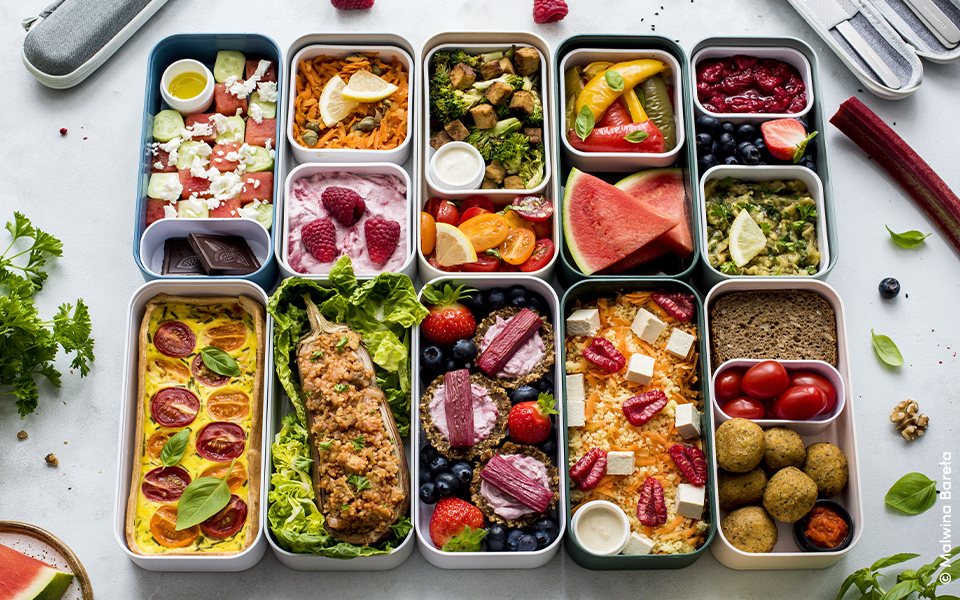 A week of batch cooking

On this week’s menu:

Make a pie crust (skip this step if a ready-made pie crust or puff pastry has been purchased).

- 250 g of whole wheat flour or another flour of your choice;

- 8 cl of olive oil or another oil of your choice;

- 8 cl of slightly warm water (quantity to be adapted according to the type of flour. Gradually pour in the water and stop when the dough is just right to knead);

Knead with your hands until obtaining a homogeneous ball of dough.

Set the ball aside at room temperature in a bowl for 20 to 30 minutes.

3.Roll out the dough and place it in a buttered and floured pie plate (or in the MB Silicase large mold). Pour the mixture and add some cherry tomatoes, filling the entire pie, cut side up.

4.Bake for about 40 minutes, until the crust is golden brown. Once out of the oven, let the pie cool before cutting a quarter (or unmold the MB Silicase) and placing it in the first compartment of the #1 bento box.

6.Wash and cut the eggplants in half, lengthwise. With the tip of a knife, score the flesh in a diamond crosshatch pattern, and brush each side with olive oil. Place the eggplants on a baking sheet previously covered with a baking mat, flesh side down, and bake for 30 minutes, or until the eggplants are tender.

7.Once the bell peppers are cooked, divide the portion in 2. Place one of the portions in the MB Silicase small container and put it in the first compartment of the #4 bento box after adjusting the seasoning if necessary.

8.Place the other half in a bowl or blender and add some paprika, ginger, the Modena vinegar, 1 tbsp of plain cottage cheese or soy yogurt, and some Cayenne pepper if desired. Using a hand blender or a blender, blend the preparation. Adjust the ketchup seasoning if necessary, before placing it in the MB Temple S sauce cup. Place the cup in the first compartment of the #5 bento box.

9.Place the broccoli in a bowl, and add the tempeh, 1 tsp of olive oil, 1 tsp of salted soy sauce and some garlic. Mix before placing the ingredients on a baking sheet previously covered with a baking mat and bake for about 30 minutes, or until the broccoli is soft.

10.Once the eggplants are cooked, divide the portion in 2. Cut one portion in small cubes and place them in a bowl. Add some salt, garlic, 1 tbsp of lemon juice and a little bit of cilantro, and mix. Place the mixture in the MB Extra ½ box and put it in the second compartment of the #5 bento box.

11.Using a spoon, scoop out the flesh from each half of the remaining eggplants and set the skin aside. Place the flesh in a saucepan and add the tomato sauce, some garlic, salt, and basil. Let cook over low heat for a few minutes.

12.Put the soy proteins into boiled water and let stand for 5 minutes. Drain the proteins before adding them to the tomato-eggplant sauce, then turn off the heat.

13.Heat some water in a saucepan. Place the whole wheat semolina in a bowl with 1 tsp of olive oil, some salt and pepper. Pour over the hot water until the semolina is completely covered. Cover the bowl with a lid and let the semolina swell for about 5 minutes. Stir after 2 or 3 minutes and adjust the water quantity if necessary.

14.Divide the semolina portion in 2. Set the first half aside. Add the second half to the tomato-eggplant sauce, mix and adjust the seasoning if necessary. Using this preparation, stuff the eggplant halves previously set aside. Place the stuffed eggplants in the first compartment of the #2 bento box.

15.To make the falafels, blend the white beans in a food processor (after rinsing them if they were canned). Add the onion, one garlic clove, some parsley, cilantro, cumin, a pinch of pepper and salt, 1 tbsp of water and 1 tbsp of olive oil. Blend until obtaining a homogeneous paste.

16.Using a soup spoon or your hands, shape the dough into balls and place them on a baking sheet previously covered with a baking mat. Bake for about 30 minutes.

17.Cut the strawberries into small pieces and place them in a saucepan. Add a little bit of water and simmer, covered, over low heat for a few minutes. Once cooked, divide the compote in 2 portions. Put the first half aside and place the second half in the second compartment of the #5 bento box, in the MB Extra ½ compartment box.

18.Once the broccoli is cooked, place it in the MB Extra 2/3 box in the first compartment of the #3 bento box, along with a slice of wholewheat bread. In a bowl, mix 2 tbsp of plain cottage cheese or soy yogurt with 1 tsp of mustard, some garlic, a pinch of salt and pepper. Place the sauce in the MB Temple S container next to the broccoli.

19.Once the falafels are cooked, place them in the first compartment of the #5 bento box, next to the homemade ketchup, with a slice of wholewheat bread.

20.Cut the rhubarb in half before placing it on a baking sheet previously covered with a baking mat. Bake for about 30 minutes, or until the rhubarb is tender.

21.For the no-bake crust, for 4 tarts, mix in a blender the almond powder, dates, hazelnuts, almonds, and bitter almond flavor if desired. Blend until obtaining a fine and homogeneous powder.

22.Butter and flour tartlet pans before dividing the dough evenly into each. Using a glass or your fingers, flatten the dough on the bottom and sides of the molds.

23.Mix the portion of strawberry compote previously set aside with 100 g of plain cottage cheese or soy yogurt. Divide the mixture evenly among the tartlets.

24.Cut the cooked rhubarb into thin strips and place them on top of each tartlet.

25.Place some tartlets in the second compartment of the #3 bento box and place the others in the refrigerator for next meals.

26.Cut the watermelon into cubes and separate them into two portions. Place the first half in the first compartment of the #4 bento box.

27.Using the second portion of watermelon, make a checkboard pattern alternating watermelon cubes and cucumber cubes in the second compartment of the #1 bento box. Crumble the feta cheese on top.

28.In a small bowl, mix the linseed oil with the cider vinegar. Pour the dressing in the MB Temple S sauce container and place it next to the watermelon/cucumber salad in the #1 bento box.

29.Complete the #1 bento box with one or two squares of 80% dark chocolate, placed in the MB Original’s food cup.

30.Divide the grated carrots in 2 portions. Set the first portion aside and place the second in a bowl. Add the shallot, sesame oil, 1 tsp of lemon juice, 1 tsp of salted soy sauce, some garlic, and capers. Mix, adjust seasoning if needed and place in the second compartment of the #2 bento box.

31.Mix 100 g of plain cottage cheese or soy yogurt with 150 g of crushed raspberries. Place the dessert in the MB Extra ½ box and put it in the second compartment of the #2 bento box.

32.In a bowl, mix 100 g of cherry tomatoes, some chopped basil, argan oil, 1 tbsp of lemon juice and a little bit of salt. Place the salad in the first compartment of the #3 bento box.

33.In a bowl, place the tahini and add 25 ml of water while stirring with a whisk, until obtaining a thick sauce.

34.Add the juice of one lemon, 1 pressed garlic clove, some chopped parsley, salt and pepper, and mix.

35. In a salad bowl, mix the semolina and the carrot portion previously set aside with a few raspberries cut in two, the almond-sesame tofu (or lacto-fermented) and the tahini sauce. Adjust the seasoning if needed, before placing the salad in the second container of the #4 bento box.